The Almonty Korea Tungsten deposit (Sangdong Mine) hosts one of the largest tungsten resources in the world.

Almonty Korea Tungsten was the leading global tungsten producer for more than 40 years and it has the potential to produce 50% of the world’s Tungsten supply (ex-China output).

The Korean operating environment is highly competitive, with relatively low materials and labour costs, low taxes and no royalties which means that the forecasted capital cost would be significantly lower than that of most comparable Western projects.

South Korea once had a thriving mining culture with many relatively small metallic mines including gold, base metals and tungsten/molybdenum. The Almonty Korea Tungsten mine was the powerhouse of the economy in the post-Korean War decades, contributing more than 50% of the country’s export revenue as one of the largest global tungsten producers. This mine, along with almost all other metallic mines in South Korea, closed in the 1990’s primarily due to low commodity prices, at a time when South Korea was emerging as a manufacturing powerhouse with companies such as Hyundai, LG, Samsung and POSCO attaining international prominence.

The mining industry was relegated to an insignificant corner of the economy, now contributing less than 0.5% of the GNP. In fact, in recent years, there appears to be a widespread perception in South Korea that the former mines were fully exploited, never to be re-opened. The former owner of the Almonty Korea Tungsten mine, Korea Tungsten Co., evolved into Korea’s largest manufacturer of tungsten cutting tools and hard metal tools with the only integrated tungsten production plant in the world, known as TaeguTec Ltd.

In 2006, Woulfe Mining Corp. was fortunate that it recognized the potential in South Korea prior to the boom and secured title of the property which was historically the largest tungsten producer in South Korea.

Plaque Translation: Your great effort in the developments at Sangdong Village has especially helped our village seniors. With this plaque, we wish to express our deepest gratitude for providing our community at Sangdong Village a better life and great happiness. 30 Nov 2016; Dean of Sangdong Elderly College, Sangho Lee. 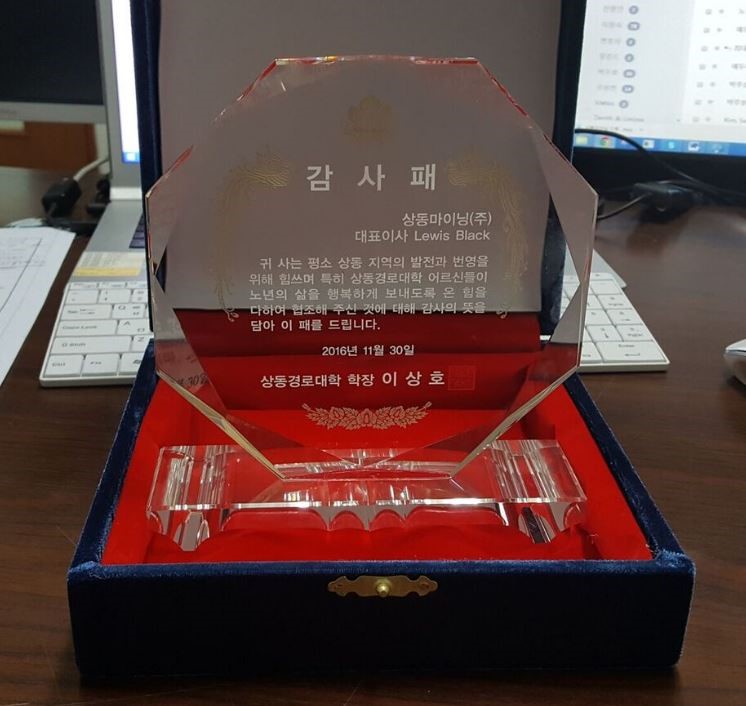 The Almonty Korea Tungsten property is located 187km southeast of Seoul, approximately three hours drive via expressways and local sealed highways. The nearest settlement is the village of Sangdong, that’s located within 0.5 km from the site and the town of Taebaek, about 30 km away and with a population of approximately 60,000.

The property is located in an area of moderately rugged relief, with steep hills rising to approximately 500m above deeply-incised valleys. Despite the terrain, access is well developed; a paved road passes within several hundred metres of the old mill site and forestry roads traverse the property. A power line passes within several kilometres of the property and water sufficient for a mining operation is available either from ground water or from a nearby river.

Temperatures rise to a maximum of about 30°C during the wet summer months of June to August. The winter period is relatively dry and extends from October to March, with freezing temperatures occurring during the period December to February. Snow accumulations can be as much as 1m. 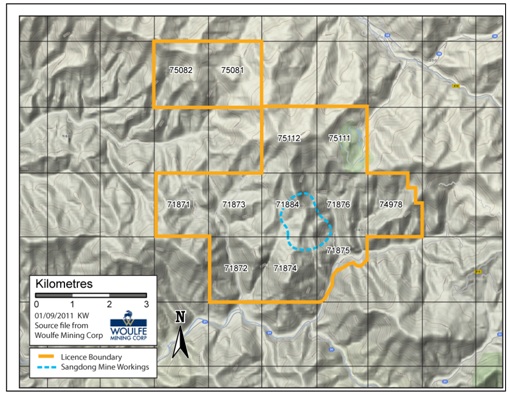 Almonty Korea Tungsten is a tungsten skarn deposit where mineralization is hosted in hydrothermally altered calcareous sediments and limestone lithologies. The regional geology reflects the position of the Korean peninsula on the eastern margin of the North China-Korean platform underlain by three Archean-aged blocks separated by mobile thrust belts of Phanerozoic age.

Unconformably overlying the basement rocks are the Paleozoic sediments of the Josean Supergroup comprised of two Formations, the basal Jangsan Quartzite Formation and the overlying conformable Myobong Slate Formation. The Jangsan Quartzite crops out at the entrance of the mine and is white, grey or pink, fine to coarse grained, with scattered pebbles and thin pebble layers developed in places. It varies in thickness from 50m to 200m and is thickest in the Almonty Korea Tungsten area. The Myobong Slate is comprised of brown, dark grey and black slate with several thin limestone beds that are developed towards the top of the 80m to 150m thick slate package. The limestone beds increase in frequency towards the top of the Myobong Slate Formation. It is within the limestone beds that skarn hosted tungsten mineralization is developed.

The milky white limestone beds of the Pungchon Limestone Formation which forms the basal formation of the Great Limestone Series conformably overlies the Myobong Slate Formation and is between 150m to 200m thick.

At Almonty Korea Tungsten, a biotite granite was intersected during exploration drilling at 700m below surface. It is believed that fluids derived from this granite were responsible for the molybdenum and tungsten-molybdenum mineralization in the Jangsan quartzite and skarn mineralization Myobong slate, respectively.
Structure

The Almonty Korea Tungsten Mine occurs on the southern limb of the regional Baegunsan syncline which has a predominant east-west strike and dips to the north between 15° and 30°. Historical mapping has recognized two pre-mineralization structures that are believed to be associated with the formation of the Baegunsan syncline. The first is a bedding parallel thrust that is best developed at the hanging-wall contact between the Main Zone (MZ) orebody and slates. This fault is best developed in the central part of the (MZ) orebody but thrust faults have been recognized at the hanging-wall contacts to the Footwall 1, 2 and 3 orebodies (FW1, FW2, FW3). Strike parallel, near vertical shear zones are also developed throughout and across the orebody. These two dominant pre-mineralization faults caused local upwarping of the orebody.

Both concordant and discordant veins are developed throughout the Almonty Korea Tungsten Mine. It is these veins that host molybdenite mineralization within the tungsten skarn.

The tungsten mineralization of the Almonty Korea Tungsten deposit is contained within four tabular, bedding-conformable skarn horizons with the Myobong Slate, namely, the Hanging-wall Zone (HW), MZ, FW1, FW2, FW3. The mineralized zone strikes east-west and dips to the north at between 15° and 30° for maximum strike and dip extensions of 1.3km and 1.5km, respectively, and outcrops at approximately 650m elevation on the property.

The MZ orebody which has been extensively mined lies 20m below the hanging-wall contact and is between 4m and 6 m thick.

The skarn orebodies are comprised of five main minerals being, quartz, white mica, amphibole, pyroxene and garnet. These minerals have been grouped into three alteration types: quartz-mica, amphibole and pyroxene-garnet. The orebodies are zoned both along strike and down dip from a central quartz-mica zone, through the amphibole to the peripheral pyroxene-garnet zone. It is important to note that within each macroscopic alteration zone, microscopic alteration zones can occur.

The main tungsten mineral is scheelite (calcium tungstate, CaWO4), accounting for >95% of the contained tungsten, with minor wolframite. Molybdenite is present throughout as a subsidiary to the tungsten mineralization, more abundantly occurring below the skarn mineralization near the underlying granite and mainly hosted in the Jangsan quartzite. Minor bismuth and gold have been historically recovered.