The history of tungsten dates back to the Middle Ages (mid 16th century) when tin miners in the Ore (Erz) Mountains of Saxony-Bohemian Erzgebirge in Germany noticed that a certain mineral often accompanied its tin ore.

The miners found that this mineral reduced the tin yield during the smelting process and increased slagging.

Foam would appear on the surface of the tin melt and a heavy slag would form in the smelter that retained the valuable tin.

A contemporary, using symbolic language of those times, described the unknown mineral as “It tears away the tin and devours it like a wolf devours a sheep”. Miners gave this mineral German nicknames like “wolform”, “wolffshar” and “wolffram” (which means wolf froth, in part because of the mineral’s black colour and hairy appearance).

In the mid to late 1750’s, the Swedish chemist and mineralogist, Axel Fredrik Cronstedt, discovered an unusually heavy mineral in Bispberg´s iron mine in the Swedish province of Dalecarlia. He referred to this heavy mineral as “tung-sten” which in Swedish means “heavy-stone”.

Cronstedt was convinced that this mineral contained a new, and as yet, undiscovered element.

In 1781, a fellow Swedish chemist named Carl Wilhelm Scheele, succeeded in isolating a still unknown acid, which he called tungstic acid (tungsten trioxide) and published the results of his experiments.

Torbeen Bergman, a professor in Uppsala, suggested preparing the corresponding metal by charcoal reduction of the obtained acid.

In 1781/82, a Spanish Nobleman, Juan Jose’ de D’Eluyar who studied metallurgical chemistry with Professor Bergman produced a review of the work carried out by Scheele on the mineral Tungsten.

Upon return to Spain in 1783 Juan Jose analyzed a sample of wolfram from a tin mine in Saxony and concluded that wolfram contained the same acid as what Scheele had gained from Tungsten.

He then reduced the oxide to a new metal by heating it with charcoal as had been previously suggested by Professor Bergman. The new metal was then named “Wolfram” after the mineral from which it was derived.

Thereafter, a number of scientists explored and experimented on the new chemical element and its compounds. In 1821, K.C. von Leonhard proposed the name “Scheelite” for the mineral CaWO4 (Calcium Tungstate).

In 1847, a patent for the manufacture of sodium tungstate, tungstic acid and tungsten from tinstone was granted to Robert Oxland. Additional patents were granted to Oxland for his work in tungsten-containing steels in 1858 and self-hardening steels in 1868. 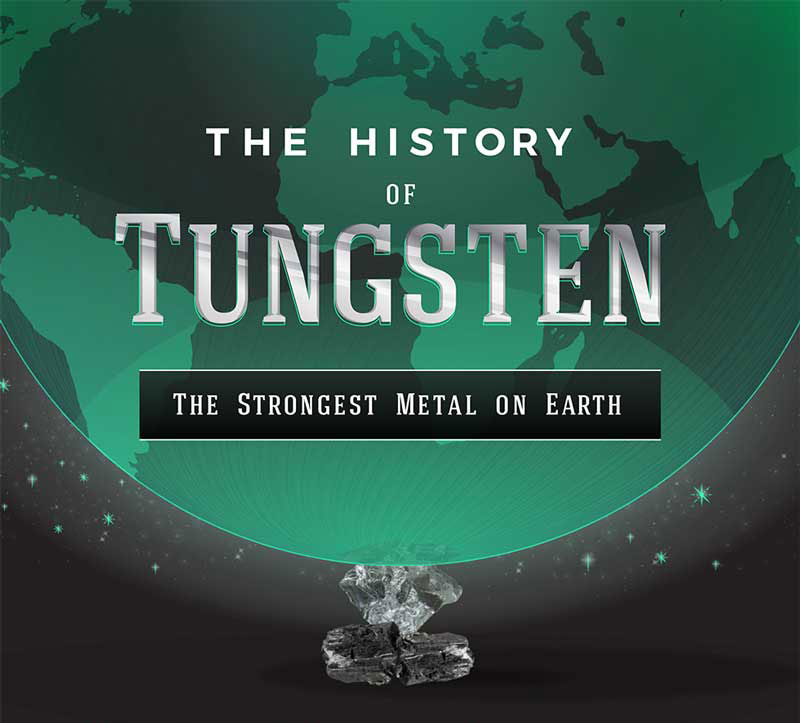 The drive to produce drawing dies and other tools with diamond–like hardness and improved toughness and wear resistance led to the development of cemented carbides during the 1920’s.
A patent for hardmetal (cemented carbide) was granted to Osram Studiengesellschaft in Berlin in 1923.

Tungsten became a strategic metal during World War II as its resistance to high temperatures and its strengthening of alloys made it an important raw material for the arms industry.

The Post-WWII industrial boom caused the demand for cemented carbides which was used extensively as cutting tool material and construction of industrial equipment/machinery to soar and has resulted in the present day market where tungsten carbide is the primary application for tungsten.